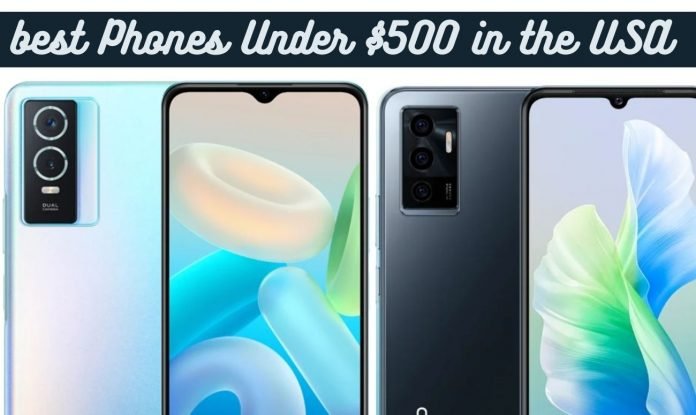 It’s not easy to find an excellent smartphone for a reasonable price these days. That’s why we’ve compiled a list of the best phones under $500 dollars for your consideration. This list is intended to assist you in determining which Android phones you can purchase with $500 in your pocket.

Premium phones, such as the Samsung Galaxy S21 Ultra or Apple’s iPhone 13 Pro Max, Xiaomi Mi 11 Ultra include the most advance technology ever seen on smartphones. They offer great performance and a comprehensive collection of features, but they also come with high costs associated which means they cannot be on the best phones under 500 dollars category. However, many of us don’t want the fastest CPU or the greatest camera available, and some of those specifications may appear to be excessive.

The majority of people want the same qualities in a dollars $500 smartphone as they do in a higher-priced model: extended battery life, a good screen, a good camera, and respectable performance. It’s tough to obtain straight A’s in all of those categories, but if you can figure out where you’re willing to accept the occasional B grade, you’ll find a phone you’ll enjoy.

This is why we have some smartphones under low budget with not too bad specifications. We have brought to you best phones under $500 in the USA 2021. If you are in these category of not wanting to spend too much money then you are on the right place. Read on!!!

The first phone to be mentioned under the best phones under 500 dollars in the USA for 2021 is the Samsung A52 5G. This is one of the Samsung A series smartphones released in 2021 and it packed excellent specs.

The 6.5-inch OLED screen on the A52 5G is bright, has decent contrast, and is generally pleasing to the eye. The finest feature, though, is a 120Hz refresh rate, which delivers animations and information a significantly smoother appearance as you swipe and navigate through menus and social feeds.

This technology will most likely make its way into more budget phones in the near future, but for now, the A52 5G is one of the few phones in its class to provide a screen that is faster than the typical 60Hz, which improves the whole experience.

With a Snapdragon 750G CPU and 6GB of RAM, the phone performs admirably in its class. With intensive work, there may be some stuttering or reluctance, but everyday browsing, app switching, and navigating are all simple. Even with a power-hungry display, the Galaxy A52 5G’s 4,500mAh battery should last at least one day of moderate to heavy use before requiring recharging.

Software is another else we should expect on Pixel phones to succeed at, and the 5A is no exception. It comes preloaded with Google’s Android 11 operating system and is devoid of the extra bloatware that other manufacturers occasionally add. The Pixel 5A also comes with a three-year warranty on OS platform upgrades and security patches, which isn’t nearly as long as Apple or Samsung’s regular software support period, but it’s clearly better than the competition. Definitely. this smartphone is one of the best phones under $500 that you can purchase in the USA

Even though it’s been over a year that the phones was released, it should still provide a good return on your investment. Upgrade to the model with 128GB of storage for $449, which is $50 more than the base model but well worth it in the long run. The iPhone SE 2020 is a perfect Smartphone under $500 category.

The iPhone SE features a single camera on the back and a single selfie camera on the front, both of which are 12 megapixels and 7 megapixels. Neither is fantastic by 2021 standards, but they are both vastly superior to what Apple supplied in previous iPhones.

On the iPhone SE, you’ll find a variety of camera options, such as portrait and HDR, but there’s no night mode.

The battery life is excellent, but not extraordinary. It should last for a day or two. Fortunately, wireless charging is supported by this iPhone, which is still uncommon at this price point.

For most people, the 2020 iPhone SE is one of the best phones under $500. If you look at it in terms of cost per year, it ends up being much less expensive than the competition because if you take care of it, it will last four or five years. But, more significantly, it’s a fantastic phone in its own way. You gain access to a big ecosystem of accessories, as well as a vast choice of iOS apps and Apple’s excellent support network.

The OnePlus 8 Pro is clearly the superior device. It comes with additional features such as a 120Hz display and a telephoto camera (you can see the list of other main differences below). However, the OnePlus 8 retains enough other features, such as 5G, a 90Hz display, long battery life, and a top-of-the-line chipset, to provide a premium Android experience.

The OnePlus 8 boasts a standard 48-megapixel camera as well as a wide-angle camera lens, both of which produce amazing photos. Nightscape, OnePlus’ low-light photography setting, did a good job of brightening up shots, although I observed it functioned a little better on the 8 Pro. The OnePlus 8 Pro’s image had better detail when I snapped a photo of a huge plant in the dark. But for the best phones under $500 dollars, this OnePlus 8 is worth it stay on the list.

The Google Pixel 4A runs Google’s version of Android, which means it’s simple to operate and free of unnecessary features. More crucially, it implies that instead of waiting for an update, Google can provide it directly. This smartphone was released before the Pixel 5A and it still manage to main it prize to be a smartphone under 500 dollars.

The 4A was released in August of last year (2020), but software updates are assured until at least August 2023. It costs $349 and comes in black or baby blue with 128GB of storage, but you’ll have to hurry if you want one because the Pixel 5A and Pixel 6 smartphones are out and Google will not be selling the Pixel 4A for long anymore.

In my overall experience about the Google Pixel 4A, I can categorically tell you that the Pixel is just a smartphone that can give you best camera. It has small screen size, and there is no 5G option for this device and this is 2021 and almost 2022.

This is another smartphone you can get for under $500 in the USA this 2021. As you’ve already known that smartphones under this price range wont give you top-notch specs.

The Nord N10 5G comes with a 64-megapixel main camera that performs admirably in both daytime and relatively low light. There’s also an 8-megapixel ultrawide camera, as well as macro and monochrome cameras that aren’t worth mentioning. The N10’s main camera isn’t Pixel 4A-level good in terms of photography result, but it shoots good images in the appropriate light if you don’t push it too hard.

Another phone notable under this under 500 dollars is the Motorola G Power 2021 device. It Comes with with a 48-megapixel wide-angle camera, a 2-megapixel macro camera, and an 8-megapixel selfie camera Photos taken in bright outdoor light have a lot of detail, but the colors are a little washed out.

It only has 32GB of built-in storage, so a microSD card is required for additional storage. There’s also a somewhat slower processor on board, which, although capable of handling all of your regular tasks, makes switching between apps and accessing the camera a touch sluggish. This is what you can expect from a phone at this price ($200) range but it still perform really great.

This is the Successor to the OnePlus Nord device released in 2020. The Nord 2 is a 5G capable smartphone in terms of connectivity. This is the last phone I will be talking about under best phones under $500 in the USA.

The Nord 2 has a 6.43-inch display with a 90Hz refresh rate, which is a little faster than 60Hz but not nearly as buttery smooth as a 120Hz display. We were a little concerned about OnePlus’ choice of the MediaTek Dimensity 1200-AI chipset over Qualcomm’s established Snapdragon processors, but in testing, it proved to be more than competent for everyday work.

WATCH OUT FOR MORE FROM US

The Top 10 Android Apps to Add Text to Photos